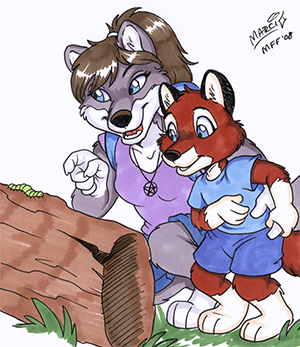 A babyfur is a member of the furry fandom who enjoys roleplaying younger characters. They may also be an Adult Baby and/or Diaper Lover (collectively known as AB/DLs), or is otherwise involved in Infantilism. There are many different types of furs in the babyfur community, each focusing on different aspects and roles. Like furry in general, babyfur culture involves a good amount of role-playing (either light or heavy), both online and in the real world.

The community has been growing more and more popular since the mid- to late 90's. While the community itself is still part of the furry fandom as a whole, it is large enough to present sufficient leaders, politics and drama to give the community a nearly independent feel to it.

Role playing babyfurs will most often take on the role of a furry character in his/her infancy or childhood. Common roleplaying themes include "cute" clothing (onesies, footy pajamas, overalls, diapers) and a child's environment such as a nursery or day care center, complete with cribs, high chairs and babyish decor. A few babyfurs lucky enough to afford the privacy and devotion will set up adult nurseries to role play as children in real life. A sexual subset of this type of roleplaying is known as ageplay.

What is this site?

Babyfur.com has been around a very long time, but unfortunately, it hasn't had much on it in quite awhile. Originally owned by our dear friend Ashley Fox, it was purchased by Natasha Softpaw in 2010. Plans for the domain are currently on hold, but could resume in the future. In the meantime, this domain is probably not for sale, unless someone comes up with an amazing babyfur website to put on it, something that hasn't existed in this community in years.

Cubhub.org is newer, a name that was used for large room/suite parties at some of the larger conventions run by Foxcub and Natasha Softpaw. Unfortunately, while the Cub Hub was well-received, and did wonders to improve relations between the babyfur community and some of the largest furry cons, it proved to be financially unsustainable for everyone involved. But, things have changed in recent years, so the Cub Hub may make a comeback someday!